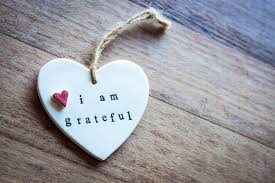 Gratitude is the quality of being thankful; readiness to show appreciation for and to return kindness. There is a variety of things that can conjure positive feelings of appreciation or gratitude that may guide people towards meaning and better health.

Cultivate the habit of being grateful for every good thing that comes to you, and to give thanks continuously. And because all things have contributed to your advancement, you should include all things in your gratitude

Gratitude is an emotion similar to appreciation, and positive psychology research has found neurological reasons why so many people can benefit from this general practice of expressing thanks for our lives, even in times of challenge and change.

Many of us express gratitude by saying “thank you” to someone who has helped us or given us a gift. From a scientific perspective, however, gratitude is not just an action: it is also a positive emotion that serves a biological purpose.

Positive psychology defines gratitude in a way where scientists can measure its effects, and thus argue that gratitude is more than feeling thankful: it is a deeper appreciation for someone (or something) that produces longer lasting positivity.

According to Dr. Robert Emmons, the feeling of gratitude involves two stages (2003):

The two stages of gratitude comprise the recognition of the goodness in our lives, and then how this goodness came to us externally lies. By this process, we recognize the luck of everything that makes our lives—and ourselves—better.

Purpose of This Emotion

People can use gratitude to form new social relations or to strengthen current ones.

Acts of gratitude can be used to apologize, make amends and help solve other problems.

Alternatively, people may feel gracious because it can be an intrinsically rewarding process. Simply being grateful for being alive is a great way to motivate oneself to seize the day.

The idea that tomorrow is not guaranteed is a strong motivator for some people to be their “best self” today.

Gratitude is a selfless act. Its acts are done unconditionally, to show to people that they are appreciated. “A gift that is freely given” is one way to understand what these acts are like.

For example, if someone is sad and you write them a note of appreciation, you are likely not asking for something in return for this person; instead, you are reminding them of their value, and expressing gratitude for their existence. At the moment, you are not waiting for a “return note” from this person.

Even when we do not expect a return, sometimes they happen. Gratitude can be contagious, in a good way. In the previous example, maybe when you are down, this person will write you a note too.

Gratitude is regarded as either a trait (dispositional) or state (of being).

As a trait, an individual practices gratitude as part of their daily life (McCullough, Emmons, & Tsang, 2002) and it would be considered a character strength, to possess gratitude. As a trait, gratitude can be developed with practice and awareness (Peterson, & Seligman, 2004).

When a person experiences the rich emotion from someone expressing gratitude for them, it is referred to as state (Watkins, Van Gelder, & Frias, 2009). Gratitude is both of these: a trait and a state.

The state of being grateful is a pleasant experience studied by philosophers ancient times. This next section provides a richer context for how this emotion functioned historically in the mindset of people and societies.

For at least 2,000 years, intellectuals have been considering the important role gratitude plays in daily life.

Ancient and not-so-ancient philosophers, such as Cicero, Seneca, and Adam Smith, preached the importance of giving thanks (Fox et al., 2015; McCullough et al., 2002). Cicero and Seneca thought of gratitude as a key virtue foundational to any successful civilization.

Recently, a paper argued that Jean-Paul Sartre’s beliefs are actually aligned with the modern positive psychology movement, since Sartre wrote about n gratitude as a character strength (Quackenbush et al., 2016).